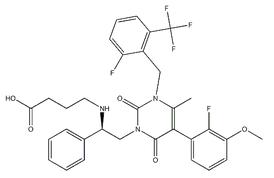 Elagolix (ABT-620) is an oral gonadotropin-releasing hormone antagonist being studied for the treatment of endometriosis, uterine fibroids and PCOS. For the management of moderate to severe pain associated with endometriosis.

Endometriosis is one of the most common gynecological disease in the world. It is estimated that there are more than. 1.76 trillion women are suffering from this.There is one in ten fertile woman in USA having this disease . In China , there are 10% female are attacked by Endometriosis, 40%-60% female with dysmenorrhea are accured by it. Previously, people were using oral contraceptive, progestin, GnRH Antagonist or operation with defects of high side effects or need injection ect. Elagolix is an oral GnRH antagonist with longer half-time, not easy to split by enzyme in body , who can avoid above defects, with bright future.

Elagolix has side effects including menopausal-like symptoms such as hot flashes, night sweats, insomnia, amenorrhea, mood changes, anxiety, and decreased bone density among others. Elagolix is a GnRH antagonist, or an antagonist of the gonadotropin-releasing hormone (GnRHR), the biological target of the gonadal production and hence circulating levels of sex hormones such as estradiol, progesterone, and testosterone. Eagolix is a short-acting GnRH antagonist, and can be used to achieve either partial or more substantial suppression of sex hormone levels. Reduced estrogen levels in the endometrium are responsible for the efficacy of elagolix in the treatment of endometriosis.

Elagolix is firstly developed by AbbVie Inc and Neurocrine Biosciences. Details as below: